The word “sushi” is often ambiguous for non-native Japanese. It is thought of as being interchangeable with raw fish. Sushi is vinegared rice topped with other ingredients. Sashimi, which is slices of raw fish alone, is not sushi because it isn’t accompanied with rice. Originally, sushi was fermented fish with rice preserved in salt, and this was a staple dish in Japan for a thousand years until the Edo Period (1603 to 1868) when contemporary sushi was developed. The word “sushi” means “it’s sour,” which reflects back to sushi’s origins of being preserved in salt. 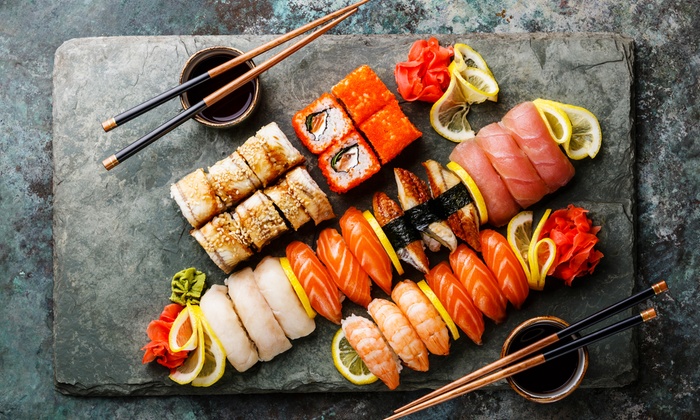 Here are the principal types of sushi:

An oblong mound of vinegared rice pressed between the palms of the hands, with a little bit of wasabi on top, and a single topping (a vegetable, a slice of tamago (egg omelet,) or a slice of raw fish) draped over it. These are meant to be eaten with your fingers. Place one piece of nigiri between your thumb and fore/index fingers, turn it upside down, and dip the fish in the soy sauce. It is done this way because dipping it rice-side first will cause it to fall apart. Place it in your mouth fish side down.

Read More:Is It Safe to Eat Swai Fish During Pregnancy?

Cylindrical pieces of vinegared rice and other ingredients wrapped around nori (seaweed sheets,) thin slices of cucumber, soy paper, or thin omelette skin. These are made by rolling the ingredients with a bamboo sushi mat and then slicing the pipe-shaped roll into cylindrical pieces. These are also eaten with your fingers. When the rice is on the outside, like an inside-out roll, this is called uramaki.

A pouch of fried tofu filled with rice. It’s okay to eat these with your fingers.

“Scattered sushi” – a bowl of vinegared rice and mixed ingredients. Eaten with chopsticks.

A cone-shaped piece with nori on the outside and vinegared rice with ingredients on the inside. Eaten with the fingers.

Vinegared rice and ingredients shaped into a block with a wooden mold. This is then cut into bite-sized pieces and eaten with chopsticks.

Still found in Japan, this closely resembles the original form of sushi; narezushi is fermented fish with rice and salt, which is preserved for a few months before being eaten. The rice is discarded after the fermentation process; only the fish is eaten.

Is it Safe Eating Sushi During Pregnancy?

It’s usually safe to eat sushi and other dishes made with raw fish when you’re pregnant. But depending on what fish the sushi is made from, you may need to make sure that it’s been frozen first. You should also limit the amount of some types of fish that you eat while pregnant, such as tuna and oily fish.

The sushi itself is not harmful for consumption, for pregnant women- the methods which are followed to make the sushi are what makes it harmful. In extreme cases, consuming sushi can also induce miscarriage in the woman. Let us take a look at a few of the risks involved in consuming sushi.

If the fish used in the dish is raw, there is a high chance of the woman contracting parasitic infections from it. Raw fish contains high levels of bacteria and other parasites, like tapeworm which can deprive the foetus of a lot of necessary nutrients when it grows. Such infections also affect your digestive system and gastrointestinal tract, which means that the growth of the foetus will be hampered. Anaemia and malnourishment are some other side effects of contracting a parasitic infection, and it can result in a miscarriage of the baby.

During pregnancy, the immune system of the woman will be suppressed and greatly ineffectual. Consuming sushi at such a time can result in the mother contracting diseases that spread through the food, like listeriosis. Raw fish can also contain harmful listeria bacteria, so this remains a huge possibility.

If the fish has not been cooked properly, it may still contain high levels of harmful chemicals like mercury. This is especially dangerous during pregnancy, as it can result in the nervous system, lungs, kidneys, vision and even the hearing abilities being damaged in the baby.

Benefits of Eating Sushi During Pregnancy

Eating Fish Overrides any of the Risks

Sushi Has Less Harmful Ingredients Compared to Others

Sushi has very minimal ingredients, so any pregnant women can be sure that there is no unusual chemical that goes with their food. Though there are less harmful ingredients found in sushi, it is best to still examine how the sushi was prepared. If you have doubts if eating sushi when pregnant is safe, directly ask the restaurant chef or any of their staff to be sure.

Eating raw fish is not bad while pregnant. But, Obstetricians suggest being sure that the raw fish is not high in mercury. With this, salmon is a great pick. Salmon is not high in mercury, hence eating sushi when pregnant is possible. Every pregnancy is different. There are women who find their appetite a bit off during pregnancy and there are some who find eating a good resort to stop their hunger pangs. In eating sushi when pregnant, the child-bearing woman should still be careful on how the sushi was prepared, its ingredients, and how it can affect their diet.

Precaution while Eating Sushi During Pregnancy

There are things you can do and look for to help prevent illness and contamination.

One of the best precautions is to frequent reputable sushi restaurants that have well-trained staff. Knowledgeable sushi chefs will easily detect anisakis larvae, which is quite visible in raw fish. Looking for the cheapest sushi may not be your best bet in this case. Reputable restaurants with trained staff will also know how to properly handle fish. The FDA has recommendations for the transportation and storage of sushi fish. It should also be flash frozen prior to preparation. Fish should be frozen to minus 4 degrees Fahrenheit for a minimum of seven days before it’s used in food. Flash freezing fish at a low temperature kills parasites and prevents infection.

Some fish are simply a no-no for eating raw or sushi style; that includes freshwater fish like pike, yellow perch, and brook trout. Never eat these fish as sushi — they must be thoroughly cooked to 145 degrees Fahrenheit before consumption. Tuna is often considered a safer option for sushi. It’s a faster fish, so it often avoids parasites. This doesn’t protect it from other contamination issues, like salmonella, but it’s one way to reduce your risk.

The average person is not trained to handle fish correctly. Additionally, a home freezer won’t get cold enough to kill parasites. And most fish sold at the supermarket is not properly frozen, so it’s, unfortunately, not sushi grade. Pregnant women should avoid eating sushi as much as possible because the risk of infection is too high.

Eating sushi while pregnant doesn’t have to be a complex or frightening indulgence. Consider the risks, and then follow these tips for a healthier, parasite-free sushi experience.

11 Benefits of Eating Ragi during Pregnancy