Dragon fruit, also known as pitaya is a tropical fruit and a powerhouse of goodness. It has a unique appearance with crunchy texture and sweet taste. Dragon fruit has derived its name from its appearance which is like that of a fire breathing dragon.

This exotic fruit is native to southern Mexico and Central America but is also found in Indian subcontinent. This beautiful fruit has red vibrant red skin and has seed speckled pulp. It tastes like a mixture between pear and kiwi. It grows on Hylocereus cactus which is also Honolulu queen, whose flowers only open at night. 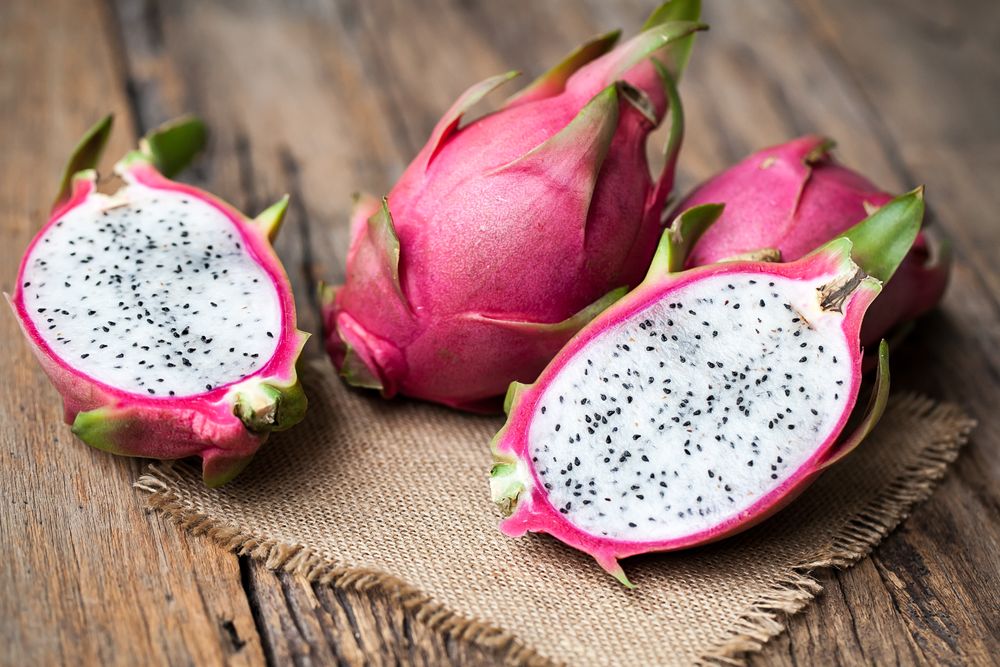 Packed with antioxidants which work wonder for your immune system Dragon fruit can boost your iron levels which are needed by the body in order to move the oxygen through the body. Adding dragon fruit to your diet can give you multiple heath benefits and cut down the risk of cancer and diabetes.

One Cup serving of Dragon Fruit which is about 227 grams contains the following nutrients:

This shows that dragon fruit has a nutritious profile and consumption of dragon fruit can provide energy to a pregnant woman as the fruit has a lot of carbohydrates in it. It is absolutely safe during pregnancy and has many benefits for you and your baby.

Is Dragon Fruit Good For Diabetes?

When you’re diagnosed with diabetes it means that this chronic diseases has impaired your body’s ability to produce or respond to the hormone insulin. This causes elevation in your blood glucose level. Therefore, it becomes crucial for diabetics to follow a balanced diet plan which helps in maintaining and balancing the elevated blood glucose levels.

While you’re managing your diet it is important to consider the glycemic index of your food. It is a number given to food from 0 to 100. It indicates the rise in blood glucose levels in your body 2 hours after the consumption of that food. If any food has a range which is less than or equal to 55, it is considered to be low glycemic food. The mid range for glycemic index is 56 to 69 while the food is considered to be of high GI if it has a range or 70 or more. This measurement is done on the basis of the total carbohydrate fiber content of food.

DDF also known as Defeat Diabetes Foundation have found out that Dragon fruit’s seed may prove helpful in regulating the blood glucose levels and therefore also have the  potential to prevent and help manage type 2 diabetes. Although there is an absence of scientific evidence supporting this theory. But if several studies are to be believed it has been found that this tropical fruit can prove to be beneficial for diabetics because of its rich nutrient profile. The fact that is so full of nutrition has led some studies to believe that dragon fruit might be used as a potential diabetes treatment.

So in order to test the theory various animal based studies were conducted and it was found that dragon fruit produces an anti-diabetic effect by regenerating pancreatic beta cells and reducing obesity risks. A study which was conducted for exploration of it’s effect on prediabetes and type 2 diabetes dictated that high doses of the fruit helped in reducing blood sugar levels in diabetic patients. As the fruit also protects diabetes against insulin resistance and diet-induced fatty liver problems.

Dragon fruit controls oxidative damage and reduces aortic stiffness in diabetic patients as they are at an increased risk of cardiovascular diseases, so regular consumption of this fruit could work in their favour. This could be added in your diet through various ways and in moderate amounts.

Is It Safe To Consume Dragon Fruit During Pregnancy?

If you’re a pregnant woman who accidently got exposed to cigarette smoke, the antioxidant effect of the fruit could prevent any damage that might’ve been caused to the baby. This tropical heavenly fruit also has monounsaturated fats which are required for the proper formation of brain in the foetus. So include it in your pregnancy diet and reap the benefits of dragon fruit.

Although it has no significant health risks and numerous health benefits it is advisable to first consult your doctor for how to add dragon fruit into your diet.

Dragon fruit must be consumed in moderation as eating it in large amount may invoke health issues such as inadequate nutrition absorption by the intestines, intestinal gas, intestinal obstruction, stomach discomfort, and flatulence due to the intake of excessive dietary fibres in the fruit.

If you regularly eat too much dragon fruit, it can produce an increase in potassium in the system, which can lead to hypotension and also reddish pee. So in order to avoid above mentioned things, consume the fruit within limits and it will only benefit you.